I find my interests pull me in many different directions. If things had happened differently I might have been a sculptor, a woodworker, a paleontologist or a stop-motion animator, or maybe I'd have spent my life working with or around animals. I could have worked in a museum or built robots, or explored distant, hard-to-reach places in the world....but illustration won out in the end.

Still, I get opportunities now and then to live vicariously through the people I meet. I love hearing about what people do for their work, or just for fun. Everyone's got at least one great story to share. Sometimes those stories lead to interesting trades.

Most of the paintings I sell are are bought outright for cash, but sometimes someone walks up with a story and an offer that's just too good to pass up.

My philosophy is that a good trade leaves both people feeling like they got the better end of the deal.

Here are a few of the barters I've made...

While in Maine, I talked with a guy about finding shed antlers in the woods. We talked about the way those antlers are sometimes clearly rodent-chewed, as mice and squirrels look for calcium, and trim their ever-lengthening teeth.

I decided I was going to have to incorporate that idea into a painting - and found the chance in Wildwood Geist. If you look at the bottom of this piece you can see a mouse, temporarily sidetracked from nibbling on a deer antler. The little guy's nearly invisible in the actual card, but I'll always know he's there. 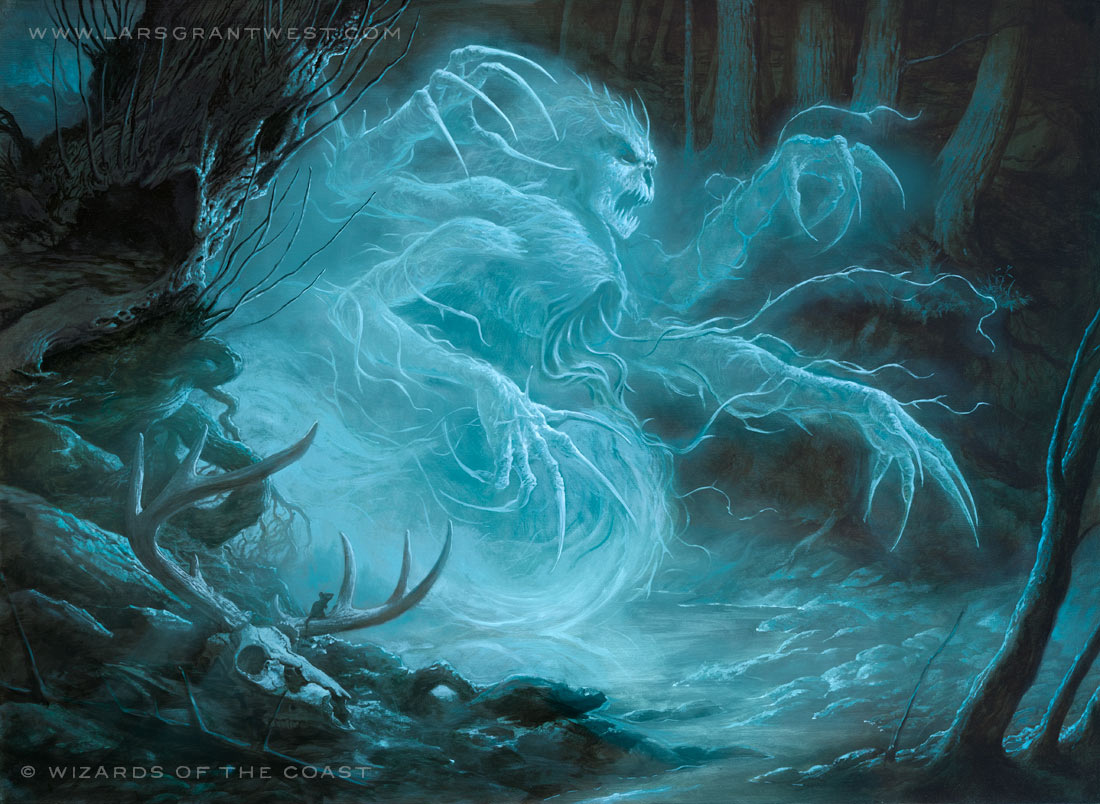 A deer skull which dwells on our house sports these tiny nibble marks on one antler. That ridge running up the center is the result of focused rodent attention. 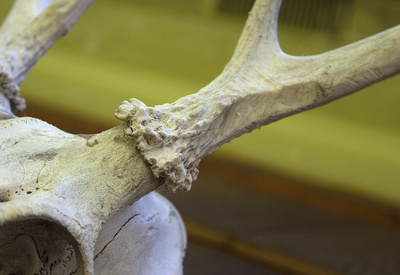 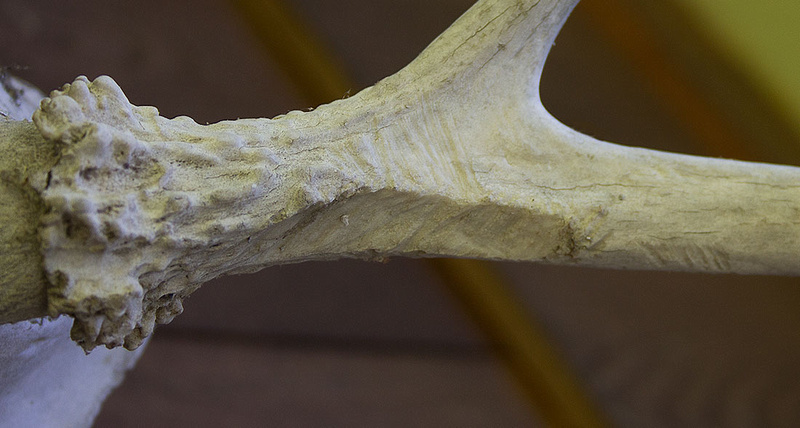 And here's a piece of bone squirrels worked into a natural piece of art.

So the trade was the Wildwood Geist original for a set of Moose antlers, which my wife and I strapped to the car.

I'm not sure if the looks from passing motorists on route 95 were due to the moose antlers or the other peculiar stuff on top of the car, but they served as a happy reminder that I'd made a good swap. 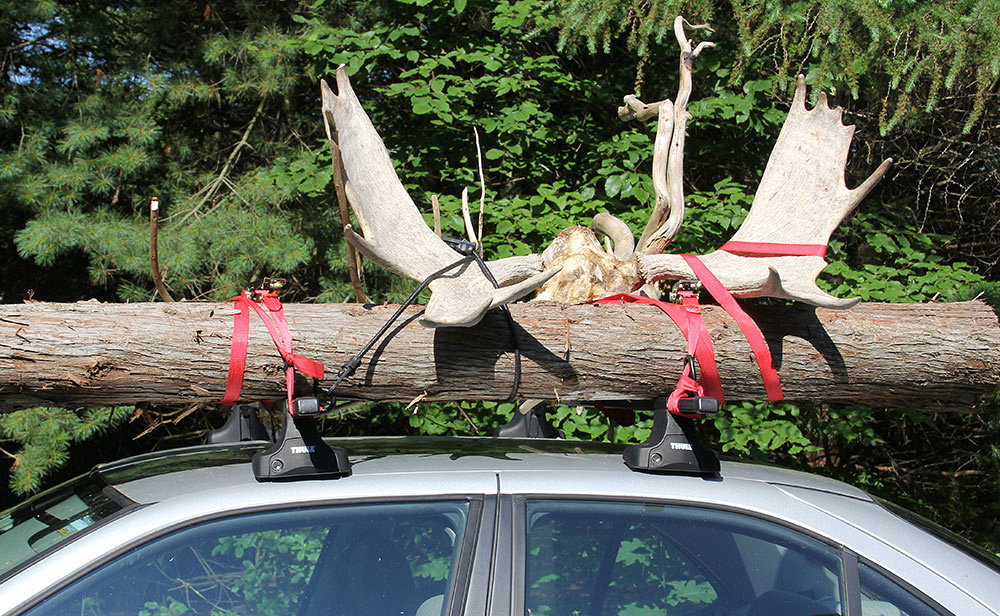 While at a Magic event I chatted with a guy for quite a while about fossils. He was interested in artist proofs, and over the course of our conversation a trade began to gel. I gave him a set of artist's proofs, and in return got some gorgeous trilobites (literally a box full, all annotated with species, location and age), as well as a location for our next family vacation.

On that note, if you're ever heading towards Lake Erie, stop by Hamburg, NY, grab some sledge hammers, pry bars, chisels, and a sun-shielding hat and spend a day at the Penn Dixie Paleontological Center.

Here are a few of those traded trilobites: 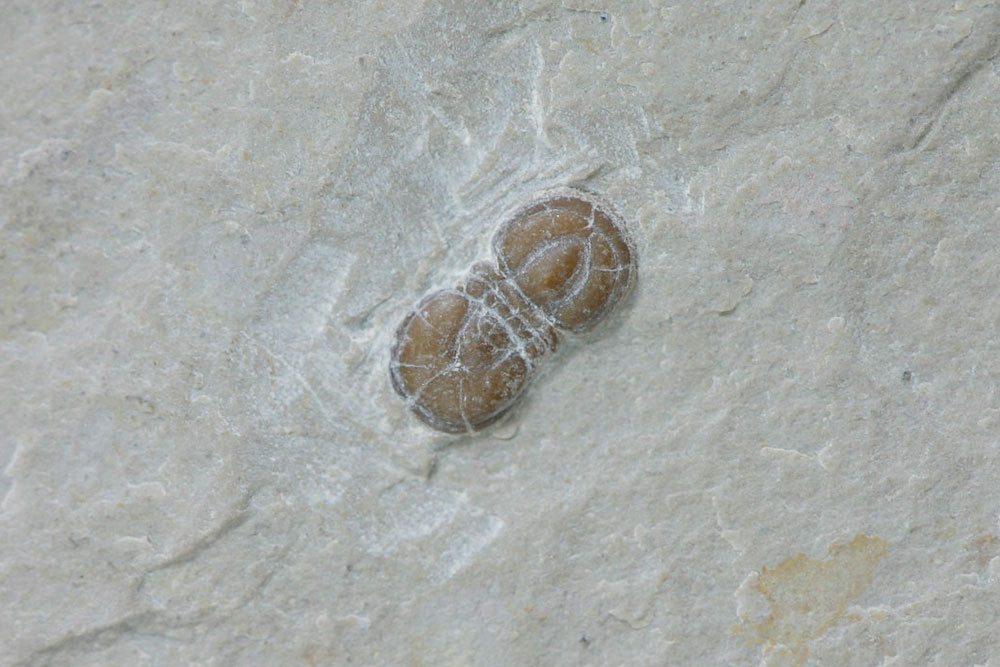 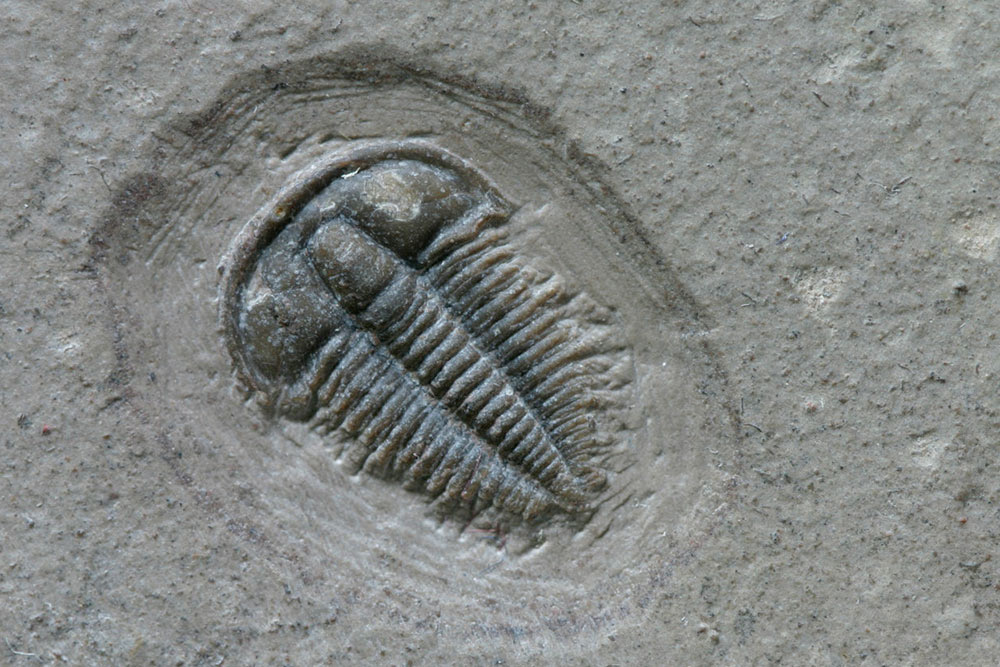 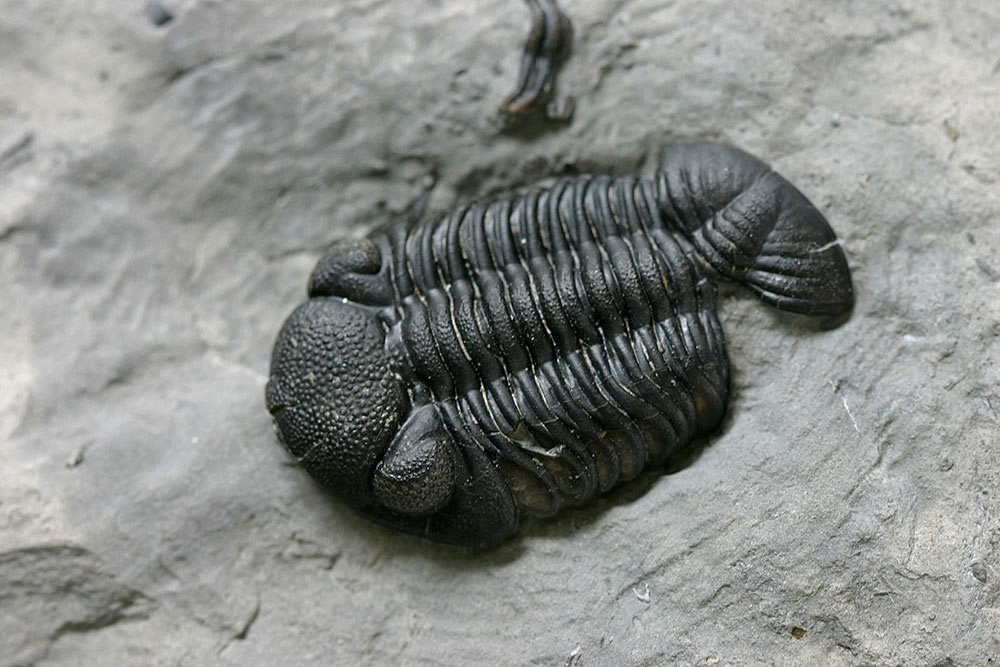 By the way, if the man who made this trade reads this, get in touch and I'll update your artist proof set! I still feel like some small pieces of printed paper stock in trade for remnants of archaic animals is just not an even trade.

Finally, an art-for-art trade. These can actually be the hardest to make.

A few years back at the Illuxcon convention, Tom Kuebler mentioned that he was interested in this wolf token I'd painted: 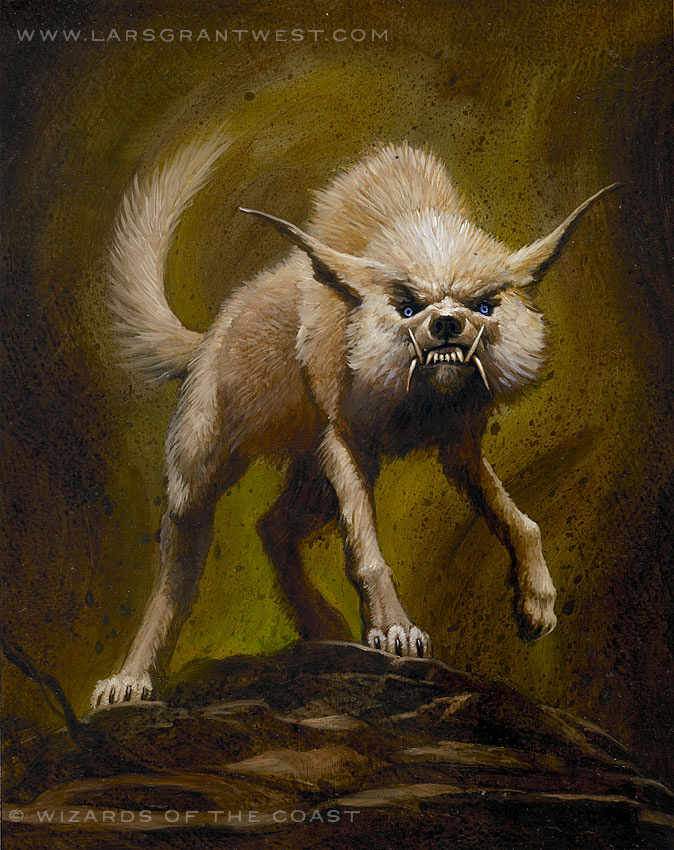 The fact is I like pretty much everything Tom makes. The man is a quirky, creative genius. A lot of his work involves hand tinted silicone castings and manually implanting individual hairs. Understandably, a lot of what he had on display was well out of fair trade range for this small painting.

Now, I don't know what I did to make Tom want to see me financially destitute, but he's been adding skulls to his product line. It really is problematic because it targets a particular weakness of mine.

Fortunately, one of his artifacts was right in this trade's sweet spot. He carried over one of his Frankenstein skulls and it was like the clouds parted and the sun shone down. I had to have it. Trade made.

Jealous? You can get your own Frankenstein Skull along with other Kuebler marvels here.

Our Frankenstein skull is now festooned with turkey feathers (pretty much everything in our house ends up buried in natural artifacts of one kind or another). No zygomatic arch is too sacred for a feather or snake skin.

With apologies to Tom, here he sits, grinning at visitors as they walk in the front door of our house: 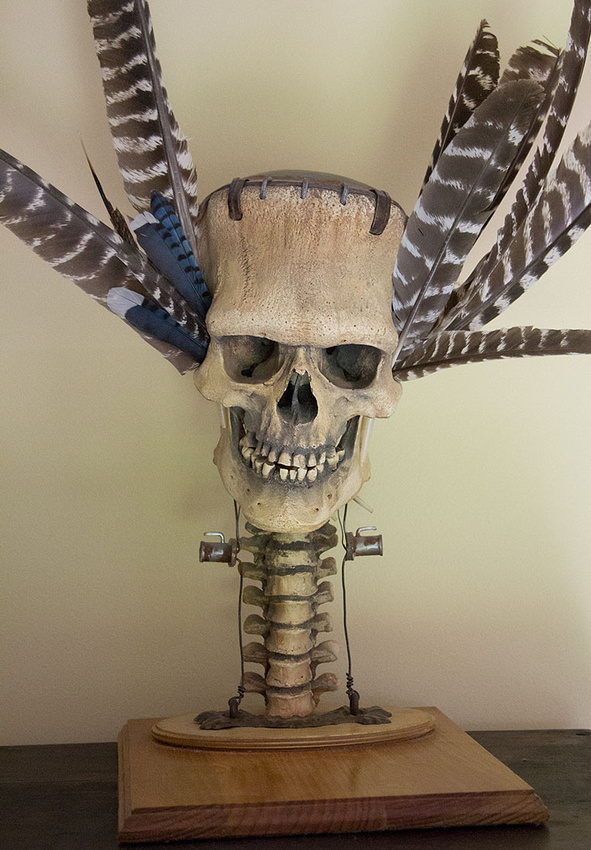 So next time you see me, tell me your story. Maybe there's a trade to be made!

BuckSkin(non-registered)
Love the Stories here.
Also should add that I was the person that traded the Moose antlers for the art. The art is an amazing piece. The story shared with friends about the swap is PRICELESS!!
monkey says(non-registered)
i love the antlers that the rodent has chewed on. I bet it was yummy! I wish there was something I could think of that I could trade with you.
No comments posted.
Loading...
Subscribe
RSS
Recent Posts
The Never Ending Hunt for Reference Tormod's Crypt Process Family Portrait Swaps, Barters & Trades! Hoppy Octopus Magic: The Gathering - Modern Masters set released
Archive
January February March April May June July August September October November December
© Lars Grant-West
Powered by ZENFOLIO User Agreement
Cancel
Continue