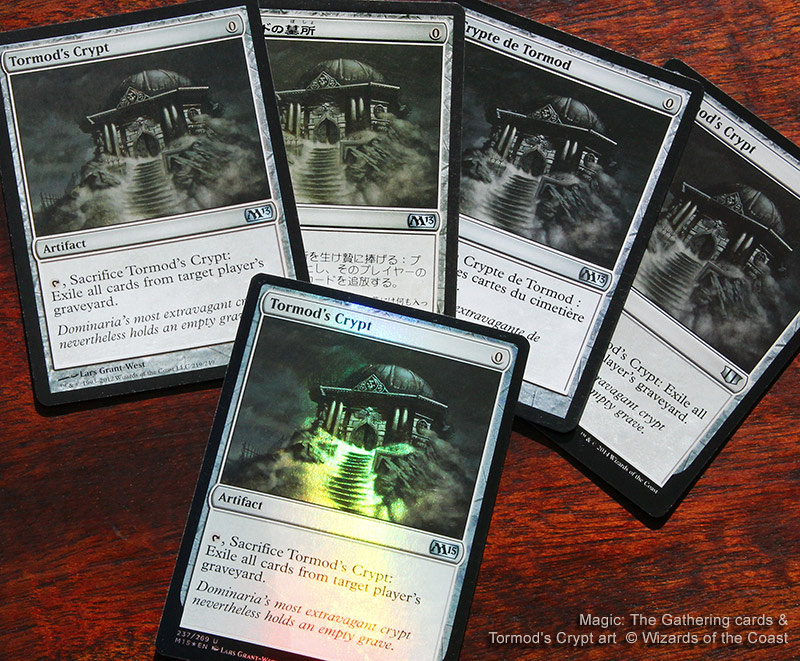 There are two questions I'm always asked at least once at every convention:

1. "What was your favorite piece to paint?"

2. "Do you just come up with art and send it to Wizards of the Coast to see if they want to buy it?"

The answer to the second question is easy: No. Each piece starts with an emailed commission from Wizards.

The first isn't so straightforward. There are certainly pieces I've enjoyed working on more or less than others…but there's no one standout favorite. It's kind of like trying to pick your favorite song. Most of us probably have dozens of songs we like for different reasons.

However - If you were to ask which card seems to start the most conversation, especially as people browse the prints I have for sale, the answer would have to be Tormod's Crypt. For people who only know the art from the card, seeing the full painting is always a bit of surprise.

I'll get back to that in a minute.

Color: none (artifact, but a 'dark' artifact)

action: Lets show this 'Crypt' as the outside of a stand-alone monument or mausoleum. Grand but ominous. Maybe there are broken stained glass windows on it from which a heavy fog constantly seeps, covering the ground in a thin but eerie mist.

As a life long fan of the classic Hammer films and Universal monsters, this assignment instantly popped my mental clutch. Gothic and gloomily atmospheric - there wasn't a single thing bad about this job!

I wanted to make sure this wasn't a classic cemetery scene - so my sketches started by minimizing the land around the mausoleum. My first sketch just puts everything around the structure into shadow.

After that the "stand alone" part of the description started to push it's way in. In retrospect it's curious to me how the brain latches on to some parts of an assignment. As I read this description eight years later I realize that the three words, "stand alone monument" drove the concept of this piece, but did it subliminally. I don't recall ever reading those words.

I began to imagine that maybe this haunted edifice didn't have the patience to wait for an adventurous soul to wander into it's not so inviting portals - but took a more proactive approach to luring them in. I could see this thing ripping itself out of the ground and - in utter silence - floating silently across a desolate, a contrail of heavy graveyard mist in it's wake.

The other sketches I submitted showed that idea.

These are the sketches I sent. They're almost embarrassingly crude - but clear enough to convey the concept:

Jeremy replied that they wanted me to use the low point of view. He really liked the floating idea, but the crew at Wizards didn't feel like the flying part fit the mechanics of the card. That was fine of course, but I couldn't get the idea of this predatory thing floating around out of my head.

The solution was to do the art, but then to add more space around it to allow me to give Wizards the art they'd preferred, but to end up with the painting I wanted to do. Jeremy was fine with that.

So I had approval. Next I needed to make the art. I began by visiting nearby Swan Point Cemetery (incidentally where horror icon H.P. Lovecraft was interred) to get a feel for the architecture. Then I set about to create the structure digitally. I sketched out a design, then built the components of the building using Adobe Illustrator, Adobe Photoshop, and 3D modeling software called Bryce. 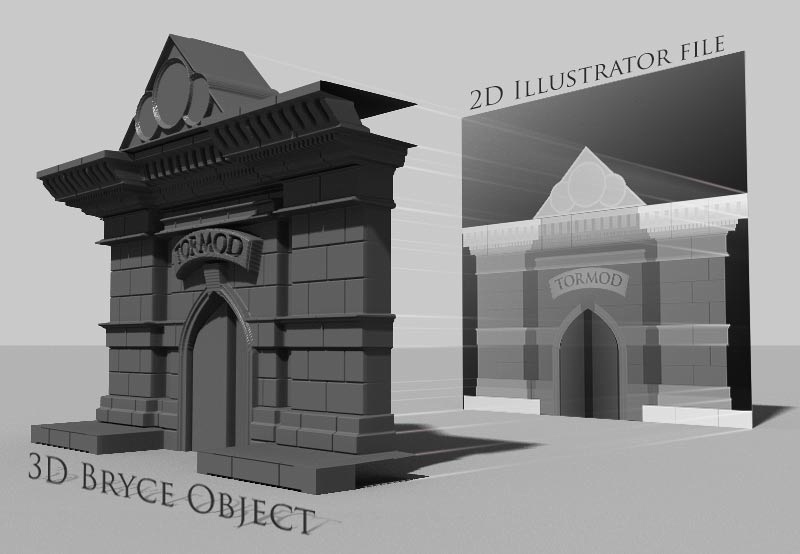 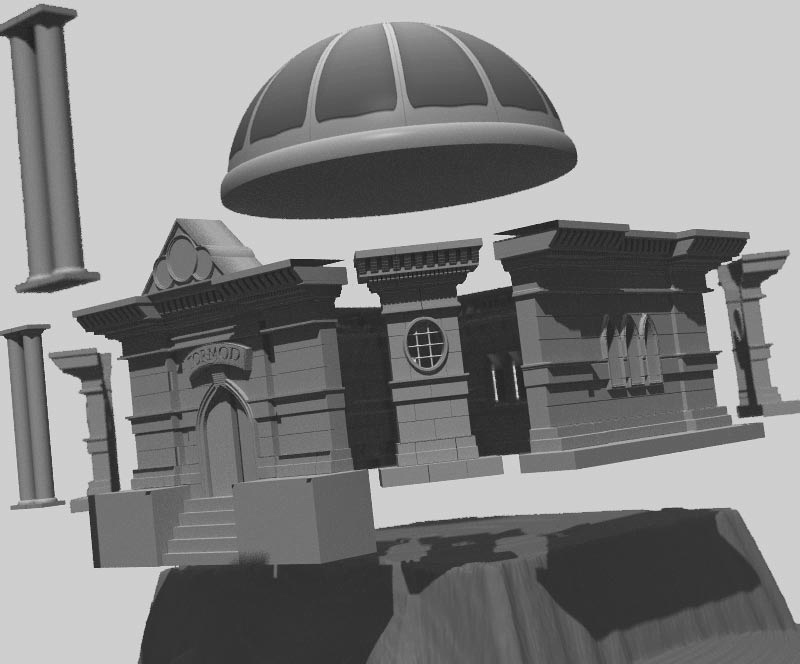 I could have built a model in cardboard or other found materials, but the complexity of the building would have made that time consuming. I also could have just drawn over the sketches, but I wanted to experiment more with the camera angles.

While capable, Bryce isn't exactly a high end modeling program. What it offered was a simple way to model a fairly complex bit of architecture, and the ability to experiment with different camera angles and lighting setups relatively quickly.

This is the model I ended up with. 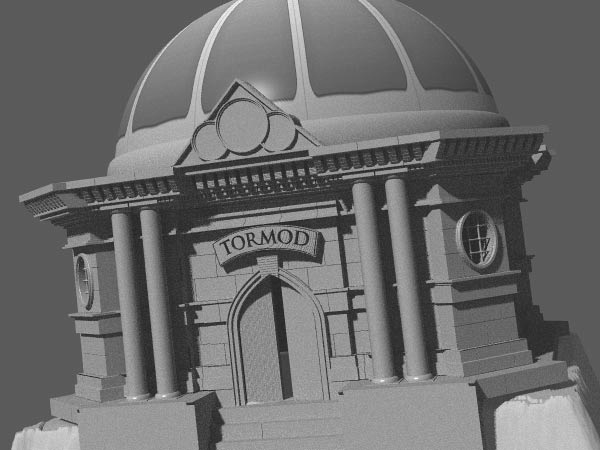 I sent it to Jeremy to see what he thought. I got a kind of chuckling response back…I had ignored one of the cardinal rules of magic art, and the last part of my brief: "ps: no crosses or real world symbols".

Yes…type is a group of culturally specific symbols - so it counts.

I had put a carved banner over the entry to say who was inside. These are all over the place on real mausoleums, but present a problem for the folks at Wizards. Remember that this card is going to be printed in several languages.

Besides, if anyone forgot who this building was built for, the name remains half an inch up as the title of the card - so out with the banner.

The next step was to paint the piece up, so I copied my drawing based on the render onto a fairly large board - about 24 inches tall, and started painting.

My usual process is to lay down a monochromatic (single color) acrylic underpainting - just to establish the details and to work out light and shadow. I use acrylics because they dry quickly. I can usually get art on the board and make any corrections within a day. The following day the acrylics are nice and dry, so I can start in with oils to build color and highlights. 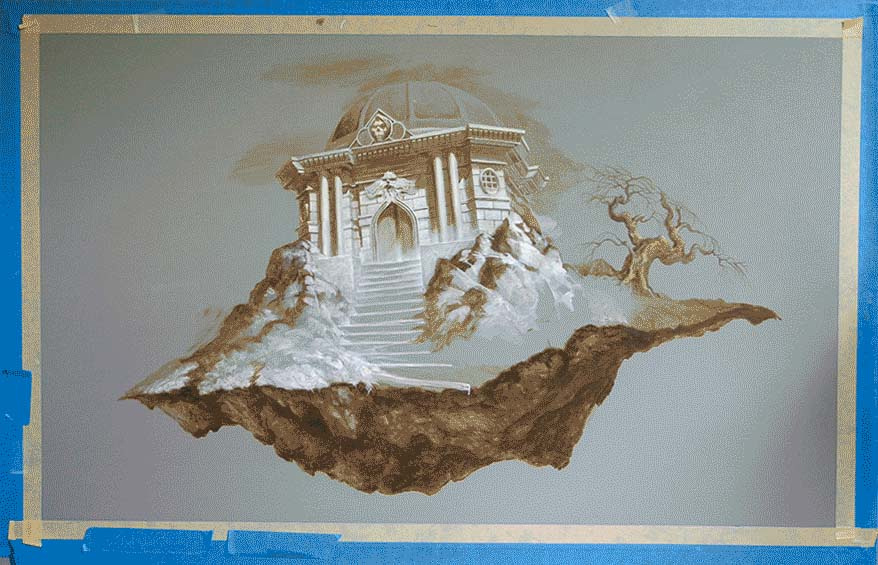 Here's the final art with my cropping recommendations to go to Jeremy at Wizards of the Coast. 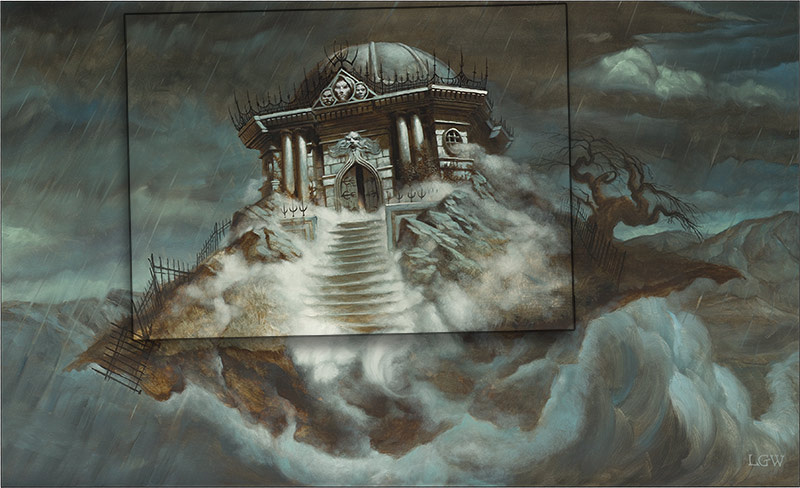 And here's how it appears on the card: 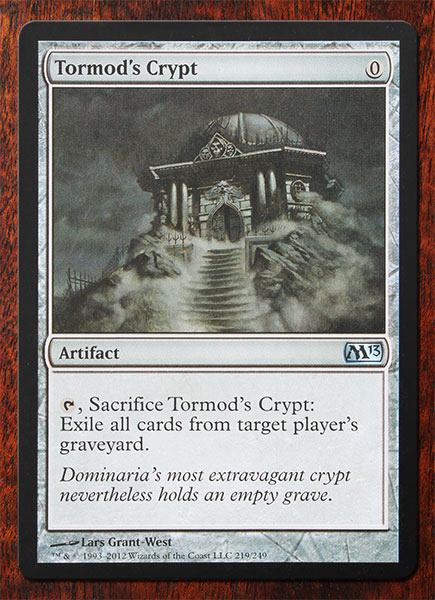 If you like the art, prints of Tormod's Crypt are available in my print store. Please note that because of it's non-standard proportions, I'm offering two versions:

With border - this format will give you the full art with a dark border.

if you frame your prints, this one can go in a  standard frame. 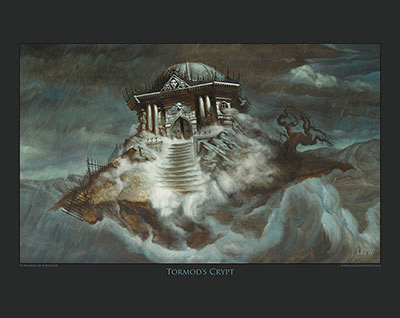 Without border - I'd recommend this one if you're doing a custom frame, as this gets you the most art at each frame size.

There are dark bands on top and bottom to fill the paper out to a standard size, but the width runs right to the edge.

You can find this version here. 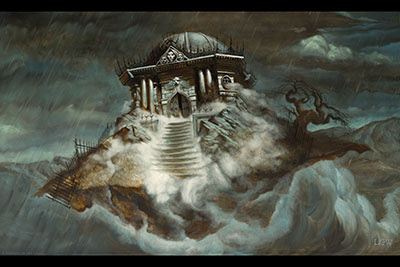 If you'd like to see walkthrough of a different piece, give me a shout and I'll see if I've got enough material saved to write about it.

Kathy Clegg(non-registered)
Love the walk thru I am not trained in computer art . It looks so great! I love your detail . I would love to see the real thing . Maybe the next time I take a trip to see your folks we can spend some time with your art! So proud of you!!! Love Kathy
Anne Grant(non-registered)
Reminds me of Grant's Tomb in NYC (which lacks the humor of that cute little beanie, seeping fog, and elegant pigeon skewers around the parapets). I love the way you tell the assignment and then give your step-by-step thoughts, decisions, and process. Excellent example of teaching, demystifying, showing how the magic happens.
Lars Grant-West illustration
You do exceptionally well without the aid of 3D software, Todd. There's a part of me that likes building things as precisely as I can, and that software satisfies that - so if I go that route it sometimes takes longer. In this case, for example, I didn't need a back on the building, but I made it anyway. I did stop short of doing the ironwork, but I probably could have cut my time down a bit if I only built what was visible.
Todd Lockwood(non-registered)
I remember when you worked on that! Beautiful piece. I still don't know how to use Sketchup or any other 3D software...
No comments posted.
Loading...
Subscribe
RSS
Recent Posts
The Never Ending Hunt for Reference Tormod's Crypt Process Family Portrait Swaps, Barters & Trades! Hoppy Octopus Magic: The Gathering - Modern Masters set released
Archive
January February March April May June July August September October November December
© Lars Grant-West
Powered by ZENFOLIO User Agreement
Cancel
Continue